The story of the Donut Hut 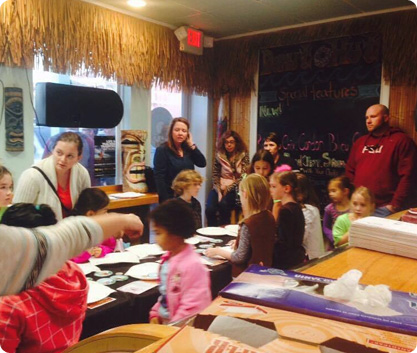 Way back in the early 90s, I met my future husband, Kevin McKee, after he moved from Mississippi to Collierville, TN, where we lived for a number of years prior to his arrival. We met through a good friend of ours named Steve Braceland, who continues to be one of our most trusted friends to this day. We dated for 6 years and got married a week after graduation in ’96. We immediately moved to attend college at UT in Knoxville, TN. We were young, full of teenage wisdom, and very excited to be on our own for the first time. We had a great time there going back and forth from the mountains every weekend, and meeting some very wonderful people around our apartment complex and at the Church we attended. The adventure did not last long before tragedy struck in our family and we were forced to move back to Collierville! My sister, Angie, had been hit head on and killed by a drunk driver one night while her boyfriend, his brother, and Angie were headed to my mother’s house. Her boyfriend’s brother also died from the injuries he sustained. I wanted to move home to be with my mother because her and my father were divorced and she had no one else for emotional support. Kevin was a very supportive husband, so we were back home by that September. Once we had gotten settled in back home, I went back to work at the Silver Caboose in Collierville, where I worked prior to moving to Knoxville. My husband did not want to attend college at Memphis State so he decided to get his real estate license to see if it would be something he enjoyed doing. At the time, Collierville was a really small town of about 12,000 people, but growing very fast in the late 90’s, so it was a great place for real estate sales. Fed Ex had started building a large campus there, so the area was definitely a prime upper middle class area.

Collierville, at the time, did not have a donut shop and I had always talked about opening one. All of our family and close friends would always hear my stories of what kind of donut shop I would build and how I would have a donut truck running around like an ice cream truck playing donut music, whatever that is! I have no idea why a donut shop always fascinated me, but it did. One particular customer I would wait on at the Silver Caboose told me I should go talk to the lady who owns Gibson’s Donuts in Memphis TN, to see how things are done. I got her number from this couple who were good friends with her, and set up a day to go talk to her. I was about 19 years old, and have always been a go getter. She was very kind to talk to me, considering she might be helping a future competitor, and showed me around the shop, and gave me some information! When recalling what she told me, I remember her saying it was a lot of work, and why in the world would I want to open up a donut shop?!? I then went back and told my husband about my meeting along with close family and friends. They all just laughed and smirked like I was off my rocker.

As the days, months, and years went by I still thought and talked about my dream donut shop from time to time. The idea was always in the back of my mind. In ‘99 my husband and I took a vacation to Seagrove Beach on Hwy 30A in Florida with one of our good friends, Jennifer Fritz. It was like a paradise compared to other places we had been to around Florida, so needless to say, we were bitten by the 30A bug! When I was young I had always went to Destin Florida, and Kevin was born in Orlando and had been all over, but neither of us had ever heard of 30A! How could a place like this exist without everyone around knowing about it? Once we returned home from our trip, my husband said let’s move there, to which I said “you are crazy!” I have always been the more level headed spouse, and he has always been the more adventurous spouse. Everyone we knew, including our family, thought he was nuts! They all said “where are you going to work, there is no jobs there?” He finally convinced me to make the move. It wasn’t that out there because we had no children at the time, so we could take some chances. During that time we were living in Cordova, TN in a cute little town home that we had redone. We put it on the market and it sold within a month or two. In the meantime we visited 30A again to begin looking for a place to live. Lucky for us the market in 2000 was pretty slow, so we were able to land a condo near the beach for next to nothing. We purchased that condo in Seagrove for somewhere in the neighborhood of $80K, which is unbelievable these days. So we finally moved to this beautiful area in April of 2000.

Once we got settled in our new place, I got a job at Criolla’s in Grayton Beach and my husband Kevin got a job at the Seaside and they placed him in the bike shop. He came home one day and said he wanted to open up a bike shop. He saw how much bikes were doing and how back then no bike shops were delivering. There were only about 3 independent bike shops in the area back then, so that was key to establishing a strong foothold in that industry here. He began BigFish Bike Rentals, Inc., in April of 2001. Big Fish has been in operation since then and has grown to be one of the largest bike rentals in the area. He started out with a few storage units and a truck. As 30A has grown all these years, the rental bike industry has exploded and with that every wannabe in the world is trying their hand at it, but it is still our baby!!! BigFish got its first physical location in Seagrove Beach in 2006 at 4042 E Co Hwy 30A. BigFish was located at that location for 6 years. In 2013 we moved across the street to 4101 E Co Hwy 30A which we were able to purchase ourselves instead of renting like we had in the past. Back to the donut story, when we were located across the street there was a hair salon called Roland’s in the bay next to ours. Roland moved out of his rental space and moved his operation to Seaside, which left an open space right next to the bike shop. This seemed like the best chance ever for a donut shop to be seriously considered. Kevin said no! My father in law said I was crazy and said “do you know what kind of hours that involves?” I once again let my dream go. As time passed we saw a few different businesses come and go from that space. I then talked to Kevin and said I was going to call the landlord and see if we can put a donut shop in there. How convenient would that be right next to our bike shop? We finally convinced him and we started the process of building of the Donut Hut. My husband did all the planning and I do have to say, for us to have never built a restaurant, he did a darn good job of it! We got the shop ready to go and opened the doors in July 2013.

The Donut Hut has been a real experience for us over the last three years. We have had many ups and downs! I finally got my donut shop, and this year the donut shop had an awesome year! There were many, many hours put in, and yes very early hours, but it has been well worth it! I pray one day there will be many more of Donut Huts around the area and around the states. If you have not stopped in please do so. We make our donuts fresh every day and have a wonderful breakfast menu also to choose from. Our bakers and staff work very hard to provide you with a great product. We also have a wonderful pizza shop across the street called Brozinni’s Pizza that we opened last year. Our pizza is NY Style and the pizza is hands down the best around, and I’m not just saying that because we own it!!!  We have perfected the dough for donuts, so now we are perfecting the dough for pizza!

Thanks for taking the time to read our story about how we made it to 30A, built our life here, and how Seagrove Beach is home to us now and forever!!!